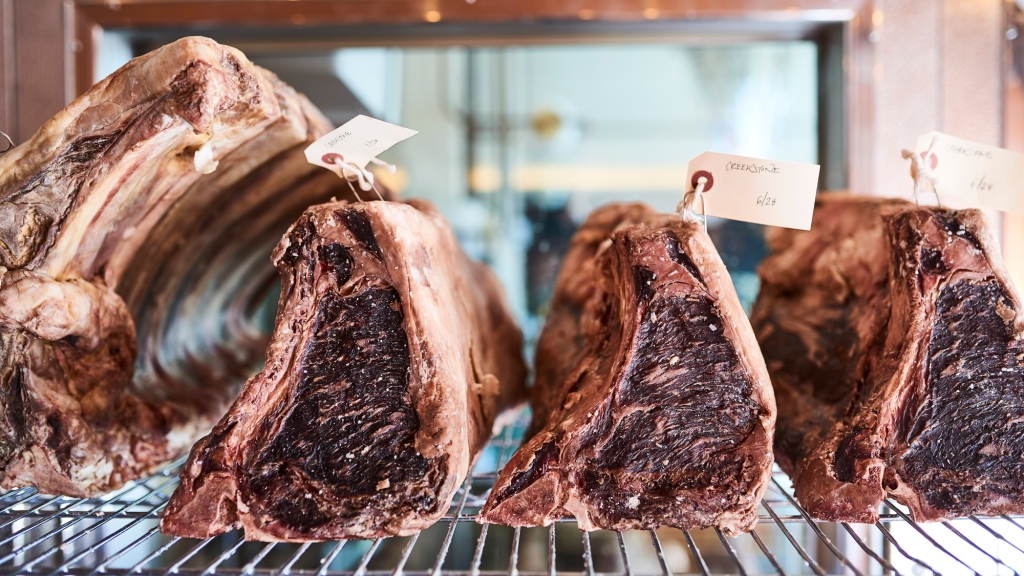 A little age never hurt anyone—unless we’re talking about our increasingly creaky knees and ever-more foggy memory, or sorer-by-the-day lower backs. Okay, scratch that. For us mortals, age hurts, period. But when it comes to such culinary delights as wine, cheese, and red meat, age has the power to enhance flavor and deepen our enjoyment.

This is especially the case for dry-aged beef, which is known for a richer flavor and more tender texture—as well as a heftier price tag—than its fresh-cut counterparts. But what is it about dry-aging that works such magic on meat?

Even if you appreciate what a dry-aged steak does for your tastebuds, the nuances about how it delivers such a transcendent experience may escape you. That’s why, with the help of food scientists and chefs, we’re unpacking exactly what dry-aged beef is and how dry-aging works.

What is dry aging?

“An unsexy way to explain it is that dry-aging, in a nutshell, is a controlled decay process,” says Katie Flannery, butcher and COO at Flannery Beef. “You’re exposing the subprimals to oxygen, which allows natural enzymes within the meat work,” she says. “They’re aerobic bacteria, so they need oxygen to survive. They come alive and start breaking down the molecular bonds of meat.” This, in turn, alters the flavor and texture of the cut.

What dry aging looks like is literally a room full of moldy carcasses. In the dry-aging process, meat hangs in a humidity-controlled environment in a way that exposes all of its sides with unimpeded airflow around the entire cut. “Then there’s the good mold that finds its way onto steaks, which will slowly start to break down and increase the amount of evaporation,” says Chris Pandel, executive chef at Swift and Sons in Chicago. “You’re puling moisture from the meats over time. As that happens the mold will extend its life and grow. It’s like the mold on blue cheese—it’s good mold not bad mold.”

Of course, before that slab of beef makes it to your plate, all of the mold will be trimmed away, leaving just “tenderized, funky, delicious meat,” Pandel says. He describes the flavor of dry-aged meat as having a nuttiness to it that you won’t get in a wet-aged steak. Likewise, it’ll be more tender and have a different mouthfeel. 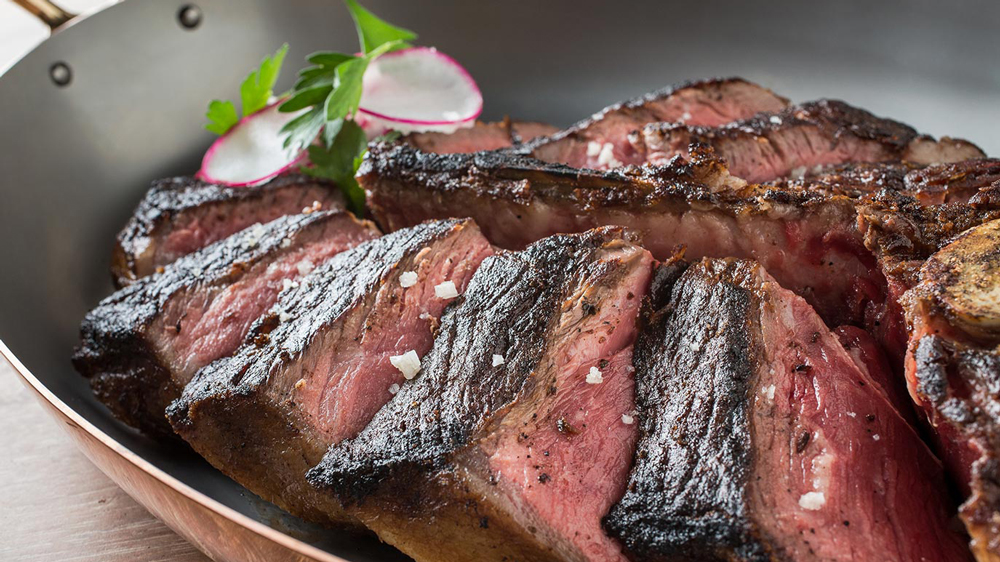 How does dry-aging change the taste and texture of meat?

For those who know their way around a kitchen, Flannery likens the process to reducing a stock to a demi-glace. “You have that pot on your stovetop. As more and more moisture evaporates, the flavor of the liquid is getting more and more concentrated. With beef, as water evaporates, the natural beef flavor intensifies,” she says.

But chemical changes also affect the flavor. “During the aging period, some of the flavor compounds and other molecules in the meat undergo chemical change that will increase some flavor components while reducing others,” says Joe Regenstein, Professor in the Department of Food Science at Cornell’s College of Agriculture and Life Sciences.

Muscle cells are made of lots of different materials, and chief among them are the proteins that enable the muscles to contract, and the molecules that fuel this process, such as glycogen, DNA and RNA. During dry-aging, these large, flavorless molecules are broken down into smaller, flavorful fragments, explains McGee.

“All of those molecules are relatively large, and when they’re broken down by the enzyme activity, they form fragments that are more flavorful than the original large molecules,” he says. “Some proteins get broken down into amino acids. They can be a little bitter, savory, such as in MSG, and the DNA/RNA material can get broken into other molecules that are savory and enhance the savoriness of MSG. And glycogen broken into sugars which are sweet.”

Dry aging transforms the texture of meat as well. “Meat has a very complex internal structure that can be difficult to bite through. By breaking some of these proteins down, the teeth can now more easily go through the meat,” Regenstein says.

What are the best cuts of dry-aged meats?

Entire primals, rather than single steaks are dry-aged, but to be a good candidate for dry-aging requires a good protective covering of bone or fat. This means there’s less surface area that needs to be trimmed away later. “Filets tend not to be aged because there’s no bone or fat protecting it, Flannery says. Dry-aging is wasteful because every single side of meat that is exposed to air will be breaking down faster than the meat on the inside.” Bone-in New York strip or ribeye are good contenders for dry-aging, Pandel says. 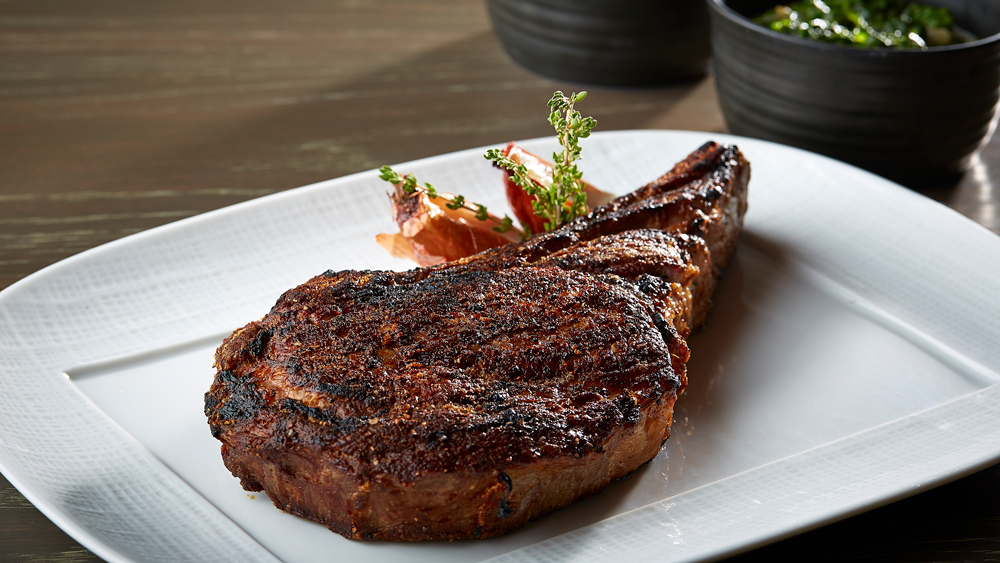 The ideal length of time for dry-aging meat really comes down to individual taste. For Flannery, the sweet spot is around 30 to 35 days. “For retail customers, we go 35 days, but for restaurant customers we go 18 to 20,” she says. “That’s because in the restaurant industry, if a diner isn’t familiar with dry-aged beef, their first reaction might be to think that something is off.”

Pandel says he likes meat that’s been aged around 45 days. “You can tell it’s been aged, but it’s not unpleasant,” he says. “We’ve gone further. In running a steakhouse it’s personal preference. Some folks like it really funky, but for some people it’s too gnarly.”

And the longer you go, the funkier the flavor will get. “Dry-aged meat does have a unique smell and flavor. Funky is a good way to describe it,” she says. “It’s a more rich flavor up until the 30-day point. When you go farther than that, and if you go really far out, like 60 to 90 days, you develop a serious blue cheese funk to it. It will smell remarkably like blue cheese.”

Why Is Dry-Aged Meat More Expensive?

With a dry-aged descriptor comes a steeper price tag—but it’s for more than just the fancy moniker. “There’s a reaction to higher prices without fully understanding why dry-aged meat is more expensive,” Flannery says. “We’re not slapping another 50 percent to the cost because we feel like it. It’s a more costly product to produce.”

Between whittling away the moldy parts and the moisture evaporation, you can lose up to 50 percent of the primal’s original weight, Flannery explains. That means if your butcher bought 10 pounds of meat, she might only have five pounds left to sell by the time it’s been aged, essentially doubling what she paid for it.

Occasionally, you may also hear the words “wet-aged” used describe a piece of meat. Wet-aging describes meat that has been aged in a vacuum-sealed plastic bag. “The meat is held for weeks or months enclosed in a plastic bag that prevents evaporation from taking place, so you don’t get the same loss of water and don’t get the same concentration of flavor,” McGee says.

“I’ll just say it: Wet-aging is bullshit. It’s basically to get the word “aging” on a product without incurring the massive loss of dry-aging,” Flannery says. “Because dry-aging so expensive is one reason people push wet-aging. There’s no trim loss and no moisture loss. But you have that cool cache of it being aged.”

Most professionals will tell you to not dry age at home, but what else would professionals say? However, they make a very compelling case when it comes to flavor and even safety. Dry aging is a controlled fermentation, which René Redzepi and David Zilber of Noma  showed you can do at home, but with necessary precautions and equipment. With dry aging steak, the problem people run into is that they don’t realize the home fridge doesn’t really work, for a couple reasons. You want your dry-aging fridge to have a more consistent temperature and air flow than your home fridge offers. Also, you don’t want anything else in the fridge, because over time the steak will start absorbing the flavors of the other food inside the old icebox with it. So when the steak actually has time to undergo the enzymatic reaction that makes dry-aged steak so delicious, it will start to have a muddled, stale flavor because of what it has absorbed in the fridge. That doesn’t mean you can’t dry age at home. The key is getting a dedicated dry-aging fridge that will eliminate all the aforementioned challenges. And instead of getting individual cuts, by large slab that allows you to trim the meat before slicing into individual steaks. Then again, you could always just order the beef already aged by an online purveyor and save yourself the time.